Shoplifting on the rise in Mishawaka 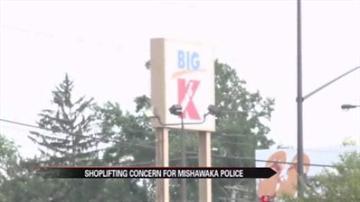 MISHAWAKA, Ind.-- Mishawaka Police have seen an increase in the number of shoplifting reports in the last six months.

It's not the most serious crime, but it's one of the most frequent for Mishawaka Police.

Gebo has seen around 500 recent cases of shoplifting, and those are just the ones reported. Police say the thieves aren't being choosy. They're hitting Meijer, Victoria's Secret, Kohls and K-Mart. Bu, some of what they're snatching up, doesn't measure up for police.

"Baby formula, laundry detergent, those are the items that are making it on the black market. They resell that stuff at a mom and pop store or on the street," Gebo said.

ABC 57 found plenty of formula for sale on Michiana's Craigslist, as well as laundry detergent like Tide. We found some for about $25 to $50 for a bulk purchase online. While it may seem worth pouring over, you could pay more in the long run. Businesses can't afford to make up for these losses without raising prices for the honest consumers.

"I work for what I earn and I don't want to see myself or anyone else that works for a living get punished because of a few bad apples," Mishawaka shopper Jeremy Parsons said.

Nationwide, retailers lose $13 billion a year because of shoplifters. The cost for extra cameras, security officers and stolen products are made up with higher prices on the shelves.

"It overburdens police officers, the courts, the prosecutors office. Businesses have to put in security cameras, hire security, and they have to raise their cost for the amount they lost," Gebo said.

Each time a shoplifter is arrested, it's one less officer patrolling your neighborhood.

"They could be out stopping something else from happening besides having to come to a K-Mart or a Meijers or a Wal-Mart to do a shoplifting report," Mishawaka shopper Tommy Hollingsworth said.