Shoppers attend Black Friday for the hype rather than sales 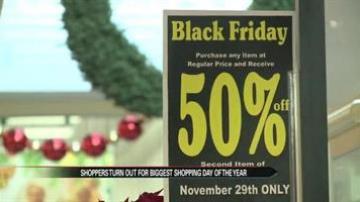 MISHAWAKA, Ind. -- University Park Mall Management says the early opening was a profit boost for them.  But shoppers told ABC 57 that it is not just the sales that bring them out, but the hype of Black Friday.

Sales, deals, low ticket prices, and free items.  Shoppers got up early Friday to hit the sales at stores across Michiana, including Target.

“We came out for the deals because everything is cheaper,” says Alexus Holloway from Mishawaka.

But not everyone bought into Black Friday's big deals. Tammy Dant from South Bend says she researched the deals before opening her wallet.

“We have noticed that at some stores, their prices are inflated a little bit so that they can offer coupons to bring it down,” says Dant.

And the weather might have also played a role in boosting Friday's sales.  The milder weather was a turn for the better, after the week's lake effect snow.

“I think the turnout with the weather has been great, there has been a lot more guests coming through the store,” says Menards General Manager Mark Wilson.

Shoppers at Menards told ABC 57 that the weather made their trip to the stores much easier.

“Especially when the weather is nice like today, it makes it a lot better,” Stephen Whitaker, South Bend.

“I mean it is about saving money, but I like the whole fun of it,” says Cheri Whitaker, South Bend.