Shoppers bring traffic outside and inside stores 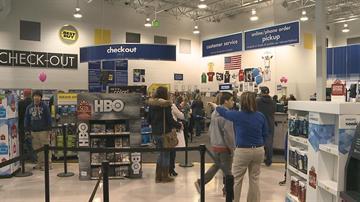 MISHAWAKA, Ind. – Whether taking advantage of after Christmas deals, returning gifts or getting tech support legions of shoppers descended on University Park Mall and the stores surrounding it on Monday.

“We’re just making some returns, we thought we’d come this afternoon thinking that it might be a little better but apparently not,” explained Zach West while in line at Best Buy.  “Yeah, we didn’t really avoid it.”

West and his friends faced a 45-minute wait in the return line on Monday afternoon.

“It’s been interesting, we’ve been kind of chatting a little bit with the lady next to me just about our return experience,” West described.

Just a few feet away the line for tech support wasn’t as long, which Jim Britton was thankful for as he waited to get some work done on his new Kindle.  Still Britton described that just getting to the point where he could wait in line was a task, traffic outside the store was a mess.

“What a Zoo!  I looked over at the mall and said, ‘what a used car lot, let’s go sell some,’” Britton described.  “I was actually a little more surprised than I thought at the number of people that are out today.”

Britton said it was interesting to see the crowds of people trying to get help figuring out their electronic gadgets which are exciting, but much more complicated than gifts used to be.

“It’s becoming more so that ways as things become more technologically enhanced,” he explained.  “It’s not like you go buy a book anymore, you go buy a kindle fire or something like that.”

Workers at Best Buy said the day after Christmas is usually one of their busier days, but this years was one of the busiest in recent memory.