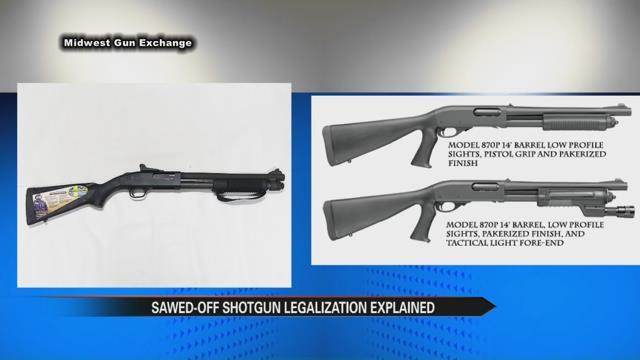 On July 1st, short-barreled shotguns will become legal in the state of Indiana and gun shops are getting ready for an influx of orders.

A Senior Special Agent with the ATF said a federal background check will have to be done before a gun owner can obtain a short-barreled shotgun in the state of Indiana.

Thomas Ahern said, “Any firearm where the barrel is under 18-inches long, that firearm must be registered with ATF.”

Brad Rupert, the General Manager at Midwest Gun Exchange in Mishawaka said that includes a tax stamp as well, so he said you can't walk into his shop and buy one from behind the counter.

Rupert said, “So one misconception is that you can just now over the counter purchase a short barrel shot gun or you can saw your shotgun off. That's not true.”

Because of these tougher regulations, Rupert believes it will be harder for criminals to get their hands on the gun commonly called a 'sawed-off shotgun.'

Rupert said, “They've been regulated so that it would take the criminal element out of it. Typically the person who is willing to go through the extensive background check to register them federally are probably not going to turn around and use them in commission of a crime.”

Nathan Tipton would call himself a gun enthusiast and he said he owns a shotgun.

Tipton believes the short-barreled shotgun has a tough image because in the past they were easy to conceal. By theory he said the pellet pattern could be have a wider impact.

Tipton said, “I really don't think it changes that much just to be honest with you. I don't really think people should be worried about it, it's not going to have too big of an effect.”

Tipton said the federal background check on customers who would want a short-barreled shotgun is extensive.

Tipton said, “I have a shotgun that I use and it gets the job done, I don't have an interest in paying $200 or $dollars to own a gun that really doesn't have any advantages over the shotguns we have now.”

To obtain a short-barreled shotgun from the Midwest Gun Exchange, they said it will take 6-8 months for the paperwork to be approved.