Silbings who alerted others to temple shooting honored 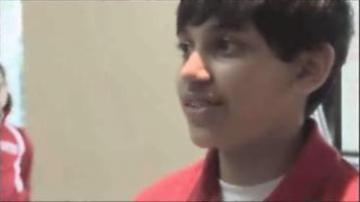 LAKE GENEVA, Wisc. – Two siblings were honored for their actions during the mass shooting at a Wisconsin Sikh Temple.

The two were playing outside the temple in August when police say the gunman approached.

The siblings ran inside and told everyone and hid in the crowded pantry until the shooting stopped.

Police say their actions saved a number of people’s lives.

“We just went out for some fresh air, and then were just playing and having some jokes,” said Abhay Singh. “And then all of a sudden, we see a guy coming out of his car. And usually, we thought maybe he needs help, or needs directions. And then, all of a sudden, he speed-walks and starts firing.”

Police say the gunman killed six people and wounded four others before killing himself.

The siblings received certificates from the Davidson Yell and Tell Foundation. The foundation teaches young children what to do when in a dangerous situation.