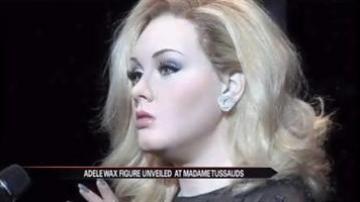 LONDON — London's famous Madame Tussauds has a new resident. A wax figure of British songbird Adele is now featured in the music section alongside other legendary performers.

The wax figure of the Oscar winning singer is dressed in a replica of the black outfit she wore for her memorable 2012 Grammy appearance.

"We have here at Madame Tussauds in London over 300 wax figures, so Adele is joining the likes of Rihanna in music area, alongside Beyonce, Lady Gaga," said Nicole Fenner. "And some top male performers as well, including Michael Jackson. So, I think she's going tobe definitely in good company here in our music area."

Makers say creating her hairstyle alone took around a month, as each individual strand of hair was inserted.