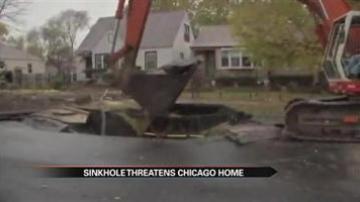 CHICAGO -- People living in a neighborhood on Chicago's south side woke up to a giant sinkhole that opened up because of a water main break.

Neighbors living there are still waiting to have their water turned back on as crews work to repair the water main.

A handful of basements were also flooded with as much as two feet of water.

Crews actually had to make the 14-foot sinkhole larger to get to the broken water main.

"We will have water on to these people before we leave here, hopefully by the end of the day," said Deputy Commissioner Bill Bresnahan.

Depending on what is underneath the sinkhole, it could take up to a week to repair that street.