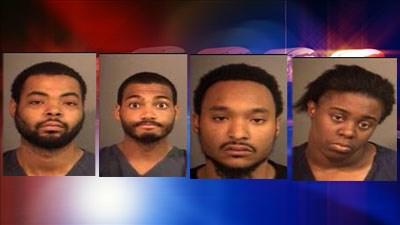 Federal charges have been filed against six people in connection with the robbery at the Jared Galleria of Jewelry store in University Park Mall.

The affidavit states the store was robbed by five males at 4:05 p.m. on April 15.

According to court records, the men parked a stolen Dodge Caravan near the front entrance of the Jared store, got out of the van and walked to the store.

Two of the men held open the front doors of the store and three walked inside.

One of the men used a large cross pein hammer to smash the glass of two of the jewelry cases, according to the investigation.

The affidavit states the other two men inside the store grabbed approximately $249,000 worth of jewelry from the cases.

The three men ran out of the store and all five men ran to the van and drove away, according to court documents.

A person who saw the men exiting the store followed the van in his own vehicle and called 911.

The van pulled into a Best Western on West University Drive, according to investigators. The men allegedly got out of the van and into two different vehicles, a blue Pontiac G6 and a gray Chrysler 200.

Mishawaka Police pulled into the parking lot just as the two vehicles were about to pull out and prevented them from leaving.

A female, Brivan Franklin, who was driving the Chrysler 200, was also taken into custody.

Jared employees were taken to the parking lot of the hotel and positively identified Lowman, Polley, Hall, McMullen and Broaden as those involved in the robbery, according to court documents.

Mishawaka Police obtained a search warrant for the van and two cars and recovered the jewelry stolen from Jared.

Franklin, of Detroit, told Mishawaka Police detectives she traveled from Detroit with the five men and was told she would be paid $2,000 to be a getaway driver.

She told police she was told the men were involved in a credit card scheme and she needed to be the getaway driver.

She said after getting text messages from Hall and seeing the men purchase hammers from Menards, she became aware they were planning to rob a jewelry store.

All six have been charged federally with interfering and obstructing commerce by threats of violence.