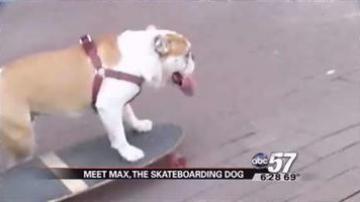 INDIANAPOLIS, Ind.--Many dogs can sit, rollover, shake hands, but can your dog skateboard?

Max is a 3-year-old bulldog that loves to skateboard, and he is making quite the scene in downtown Indianapolis.

Max's owner bought him a skateboard when he was a puppy, and he wanted nothing to do with it.

Eric Yorkman, Max's owner said," Three months ago, Max jumped on the board, took off down a hill and circled around a did it again 4 or 5 times and that's when I knew he had it."

Max has been addicted ever since, and so far no broken doggie bones. Yorkman said that he wants to teach Max to skate in a half-pipe.