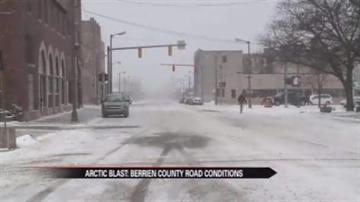 In the downtown area of Berrien Springs, snow is really starting to pile up. Although it isn’t creating major issues, many people are having to get out the shovels.

The usual salt mixture isn’t enough to combat slick roads, so crews are mixing the salt with sand to give drivers more traction.

Even though plow drivers have furlough days city representatives say they haven’t had any issues so far.

"Furlough days have not impacted us. Our bigger issue right now is dealing with Mother Nature. Mother Nature is the one we've been having to deal with now and if we could get her to cooperate we'd be good. We'd be real good,” said Darwin Watson, Deputy Director of Benton Harbor Public Works and Utilities.