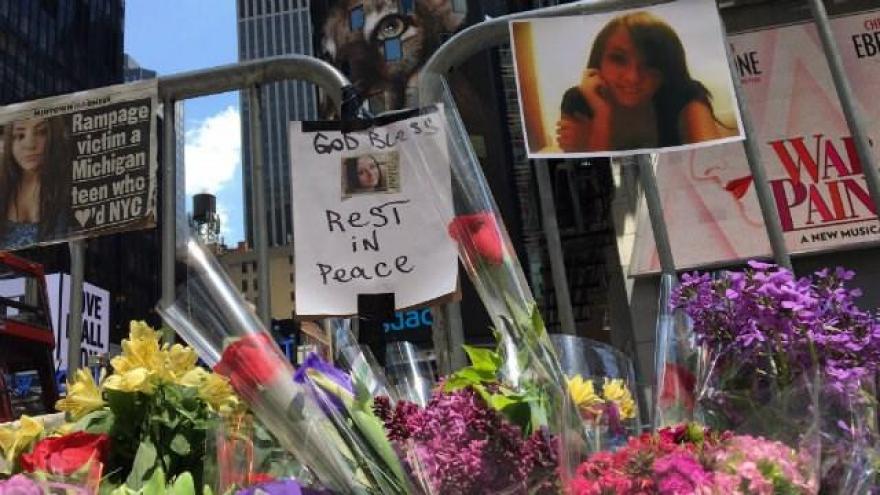 (CNN) -- The 18-year-old woman who died in the Times Square rampage on Thursday was a Michigan high school graduate with a knack for baking muffins, according to officials at her school who knew her.

Alyssa Elsman was the lone person killed in Thursday's midday attack, in which police say a suspect intentionally drove onto the sidewalk and hit crowds of pedestrians in New York's Times Square.

"It's just an empty hollow feeling. That's my first-born daughter and I'm never going to see her give me grand kids, I don't get to walk her down the aisle," he said.

Elsman was visiting New York with her mother and 13-year-old sister.

Her sister, Ava, was among 20 other bystanders who were injured. She was being treated for a collapsed lung and broken pelvis, officials said.

On Friday, a makeshift memorial for Elsman of flowers and photos was created in the area near where she was killed.

"It doesn't bring her back but it's nice to see the outpouring," Elsman's father said. "New York's not the town of jerks that people think it is. It's a town that has a big heart."

Elsman, from Portage, Michigan, had visited Times Square before. In April 2016, she posted a photo on Instagram from the red stairs that overlooked the throngs of pedestrians in the busy New York tourist attraction.

The city is just south of Kalamazoo.

"Our deepest sympathies go out to the Elsman family," said Portage Public Schools Superintendent Mark Bielang. "It is the most devastating kind of sad when a wonderful person in our community is lost so young, and under such heartbreaking circumstances."

"She was an incredible baker, and was very involved with our culinary program," Alburtus said. "She would make the most wonderful muffins, and the students would sell them before school to help raise money for the program."

"Alyssa was the type of person who seemed very shy and reserved when you first met her, but once you started talking to her you realized she was smart, funny and engaging," Alburtus said. "She will be deeply missed by the staff and students here."