Sneak peek at US Navy's new $13B aircraft carrier 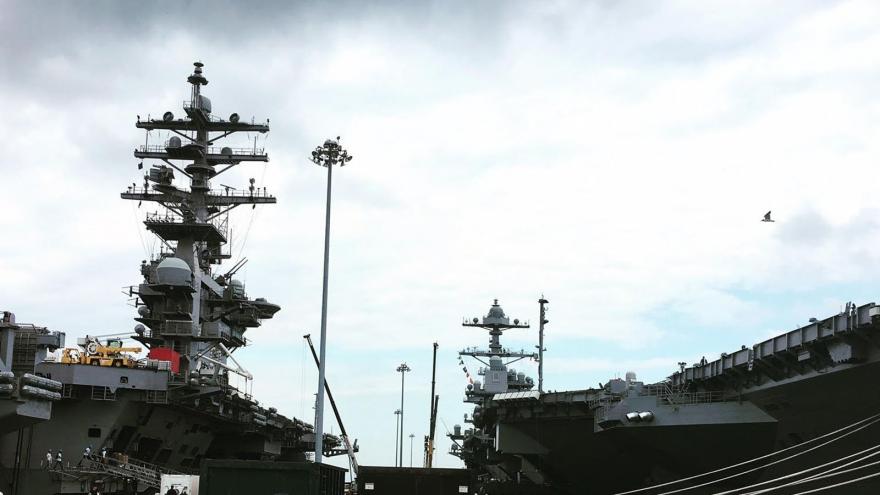 NORFOLK, Virginia (CNN) -- Perched 50 feet above the USS Gerald Ford's massive flight deck, Petty Officer 1st Class Jose Triana has a clear view of the horizon from his padded captain's chair in the pilot house of the world's most advanced aircraft carrier.

"This ship can basically drive itself," Triana said, pointing to a touch-screen navigation display that has replaced the traditional throttle system used to power and steer the US Navy's older carrier classes.

The one-of-a-kind control system is just one of many state-of-the-art upgrades aboard the $13 billion USS Gerald Ford that was commissioned into active duty on July 22 after eight years of construction, development and testing.

As the first new carrier design in 40 years, the 1,100-foot Ford incorporates advanced technology and operational systems that will allow aircraft take off and land more quickly, a smaller crew and improved survivability against projected threats, according to the Navy.

"We've worked a great deal to automize a lot of what we do," he said, highlighting that the Ford maintains a crew of 2,600 sailors -- 600 fewer than its predecessors in the Nimitz-class.

State-of-the-art electromagnetic catapults and advanced arresting gear have been coupled with new structural designs -- including a larger flight deck to improve aircraft maneuverability and a repositioned "island" (the tower where the captain sits) for better visibility.

These systems are expected to streamline flight operations and allow the Ford to launch 33% more aircraft than older carriers in the fleet -- meaning it will be able to pack a bigger punch.

"The more bombs I get over the target area the more lethal I am," said Commanding Officer Capt. Rick McCormack.

"Certainly we've taken a hard look at the technology," said Capt. Gaut, McCormack's second-in-command. "We are always trying to stay a step ahead of the adversary and I think we've done that with this carrier."

The Navy has operated 10 carriers since the retirement of the USS Enterprise in 2012 -- one fewer than the 11 carrier-force mandated by Congress in 2011.

The Navy was granted a waiver as it waited for the USS Gerald Ford to be completed.

The third Ford-class carrier, the USS Enterprise (CVN 80), is set to begin construction in 2018.

The first of three Ford-class carriers ordered by the Navy -- whose combined cost is expected be close to $42 billion -- the USS Gerald Ford's innovative features have been touted as one of its biggest assets but testing those unproven systems has, at times, yielded growing pains.

Early testing of the carrier's electromagnetic catapult failed in 2015 -- just one of several setbacks for a program that has been criticized by some lawmakers for a series of schedule delays and cost overruns.

A 2016 memo from Michael Gilmore, the Defense Department's director of operational test and evaluation, said the most expensive warship in history continued to struggle launching and recovering aircraft, moving onboard munitions, conducting air traffic control and ship self-defense as recently as last year.

At the time, the Ford was already two years behind schedule and the memo's release came just days before the Navy announced the carrier would not be ready before November 2016 as was previously promised.

President Donald Trump reaffirmed his commitment to increasing the Navy's carrier fleet from 11 to 12 ships earlier this year during a speech aboard the USS Gerald Ford but just a few months later directly attacked the Ford's electromagnetic catapult system in an interview with Time magazine.

"It sounded bad to me. Digital. They have digital. What is digital? And it's very complicated, you have to be Albert Einstein to figure it out. And I said -- and now they want to buy more aircraft carriers. I said, "What system are you going to be-- "Sir, we're staying with digital." I said, "No you're not. You going to goddamned steam, the digital costs hundreds of millions of dollars more money and it's no good," Trump said.

However, the carrier's commander said he is confident in the new technology.

"It's really about the envelope. It's opening the envelope for future aircraft and future capabilities of the Navy and we'd otherwise be contained with a steam catapult system," McCormack said.

"With all new technology there are risks," he said. "But that's why we're here -- to go out there and shake them down."

Despite delays to the Ford's delivery, the Navy said that the Ford-class carriers will yield a $4 billion reduction per ship cost as compared to its predecessor.

First of its kind

Despite the challenges that come with developing and testing a carrier that is first in its class, commanding officers touted the expertise demonstrated by the Ford's crew members in operating its advanced systems.

"These sailors onboard are experts in the equipment ... they are the ones who are testing and evaluating it for the future of Ford-class carriers," said Command Master Chief Laura Nunley, the highest-ranking enlisted sailor on the carrier. "That alone brings a huge sense of ownership and I couldn't be any prouder of the crew," she said.

Many of the crew members have been with the carrier since the earliest stages of development -- supplementing a lack of experience out at sea with a deep breadth of knowledge about the new technology that is expected to set the standard for the future of the Ford-class.

The crew has also played a key role in helping many of the commanders get up to speed on the intricacies that differentiate the Ford from the Navy's other carriers.

"It's been a little bit of a fire hose to the mouth trying to absorb all the information I need to absorb, but it's been an amazing experience," said Gaut, who joined the ship nearly a month and a half ago and has never been part of the pre-commissioning process for another ship.

Gaut said he has leaned heavily on the crew's understanding of the Ford's advanced systems since coming aboard.

While the Ford's commissioning ceremony represented a major milestone, the crew and commanding officers stressed that there is more work to be done to prepare the carrier for its first deployment.

The Ford's propulsion and basic systems were tested during a first round of sea trials in recent months, but one major remaining hurdle will be to test the carrier's electromagnetic catapult's ability to launch actual aircraft.

To date, the system has successfully launched "dead-loads," which are sleds meant to simulate the weight of an aircraft, but the first tests using live planes won't occur until sea trials scheduled to take place in the weeks after commissioning.

"The biggest challenge is to test the systems ... in theory they are incredible, but we need to test them and make sure they do what they are supposed to do, which is allow us to put the ship in harm's way and fight the fight," said Gaut.

Following its commissioning, the Ford will now undergo months of additional testing to correct any remaining deficiencies and integrate the 75-plane air wing before its first deployment scheduled for 2020.