Snowy and frigid week ahead 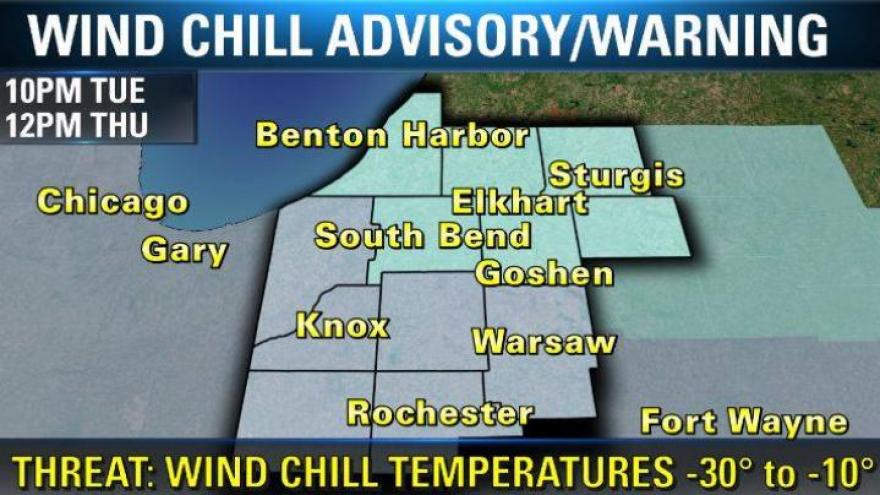 Update Tuesday 1/6 11:30AM: Wind chill advisory/warning will go into effect for all Michiana starting at 10PM tonight lasting through noon on Thursday. Daytime wind chills will drop as low as -10° with wind chill at night falling as low as -30°. During the night time hours, exposed skin is susceptible to frost bite after 15 minutes of exposure. Hypothermia is also a threat of wind chills that drop to these dangerous levels.

Previous lake effect snowfall forecast for Tuesday night into Wednesday is still in agreement in terms of possible totals and timing. - Greg

Update Monday 1/5:  No major changes to the forecast, snowfall totals have trended down from the early forecast issued Sunday (Fig 5). The trend is still for most to see between three and six inches of snow (Fig 2), with lesser amounts farther to the north and east, higher amounts to the south and west. This will have the greatest impacts to the US-30 corridor and south.

Lake effect snow will ramp up Tuesday night into Wednesday, and for those who saw less with the system snow could see another four to six inches (Fig 3). By the end of the week, there will be spots that see a foot or more of snowfall, especially with lingering lake effect.

ABC-57 News: After a messy weekend an arctic blast will drop temperatures into the single digits starting today, then an Alberta Clipper will bring a burst of significant snowfall to Michiana.

Monday Night: A Winter Weather Advisory has been posted for Monday night into Tuesday morning as a storm system sweeps through Michiana overnight, bringing a burst of four to six inches, to a wide swath of Michiana (Fig 2). Areas to the south and west could see higher amounts from this system snow. Expect the worst driving conditions after midnight through early Tuesday morning, this includes the morning drive.

Tuesday: In the wake of the clipper system, the wind turns to the northwest, another round of lake effect snow is expected. Amounts will likely be similar to Sunday night. (Fig 3).

There will be breaks between each wave of snowfall, which should allow road crews ( and everyone else) to dig out. Final totals will be running near one foot for most the area by Wednesday morning. The greatest impact to travel for most will be the morning drive, Tuesday.

Along with the snow, frigid temperatures will last all week, with highs mostly in the teens. Overnight lows will be near zero with wind chill values below zero. Make you sure are dress properly when going outside, and have extra clothing and blankets in your car if you're stranded.

Watch the latest weather webcast and see the timing with ForecastTrack and the 10-day here.