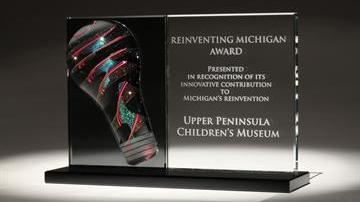 This is the third Reinventing Michigan award presented by the governor.

“Curiosity about the way the world works leads to innovation,” Snyder said. “The Upper Peninsula Children’s Museum’s creative, hands-on exhibits and exciting programs are helping spark ideas in a new generation of entrepreneurs who will change the world.”

In addition to hosting exhibits designed by kids, the museum’s Kid Bizness program supports young entrepreneurs by allowing them to make and sell their own products in the Sprout toy store. The museum’s 8-18 Media program provides youth journalists the opportunity to write stories and record weekly radio spots.

The children’s museum is housed in a renovated cold storage facility. Since opening in 1997, the museum has spurred further revitalization efforts in Marquette’s once industrial downtown area by renting space to a variety of specialty shops and office studios.

In his inaugural address, Snyder announced that throughout the year he would celebrate Michigan’s history and recognize leaders who are contributing to the state’s reinvention, with the goal of changing people’s perceptions about Michigan. That effort is being spearheaded by The Henry Ford President Patricia Mooradian.

The Reinventing Michigan award was created by the nationally renowned glass artisans at The Henry Ford. It incorporates a light bulb symbolizing inspiration, invention and innovation. The award was paid for with private funds.

(This was a press release courtesy of Michigan.gov)