Social Security warns checks may be in jeopardy 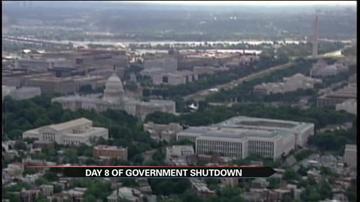 WASHINGTON, D.C.  — The Social Security Administration is warning that checks to millions of Americans could be in jeopardy unless the debt ceiling is raised.

Just over $2 billion will be lost in worker productivity by the end of Tuesday in day eight of the shutdown.

And now, a plan to give back pay to furloughed workers has stalled in the Senate.

Meanwhile, President Obama has upped the pressure on House Speaker John Boehner to hold a vote on a clean bill extending government funding.

"The reason Speaker Boehner hasn't called for a vote on it is because he doesn't, apparently, want to see the government shutdown end," said President Obama.

The Speaker says a funding bill cannot pass unless Republicans get the changes to Obamacare they're demanding.