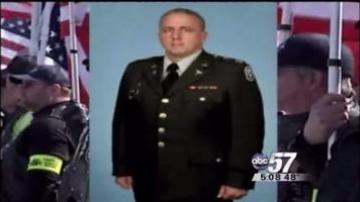 The body of an army nurse who died on Skype while in Afghanistan is now back home.

Army Cpt. Bruce Cark died during a video chat with his wife on May 1. His wife saw him collapse during their conversation.

Despite claims she saw a bullet hole in the wall behind him, the Army said he was not shot and there was no foul play involved.