Some in Michiana want to help Baton Rouge flood victims 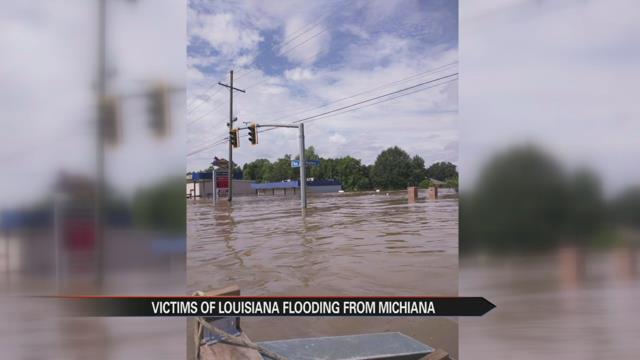 “It was devastating seeing all these people just gather on the street looking at their house or apartment being flooded,” says Victoria Stewart of Elkhart.

Stewart moved to Baton Rouge this summer and says many in Louisiana expected Thursday’s rain fall to stop.

“That’s what we all assumed was going to happen and Friday came and it was still raining and my friend texted me saying everything is flooding,” says Stewart.

This weekend the Red Cross housed thousands in emergency shelters. Red Cross representatives say this is their largest relief effort since Hurricane Sandy.

Ziffer just moved to Fort Wayne from Baton Rouge and spent her second weekend in the Hoosier State glued to her phone. Her family sent her updates including pictures of her neighborhood underwater and her grandma being rescued by a boat.

“So two feet per hour, people just had water pouring into their houses, and if we can do anything to give back when we are sitting high and dry,” says Ziffer.
Thousands of miles away from home, Ziffer is trying to find any way possible to help.

At this moment the Red Cross says they are excepting monetary donations.

“We have a text to give number so that anybody can give to support our relief operation down there,” says Sue Gulley, the Executive Director of the Red Cross Northern Indiana.

The Red Cross also has a volunteer from Goshen who will travel to Baton Rouge to help.

Right now the Red Cross is accepting monetary donations. For more info on how to donate click here.