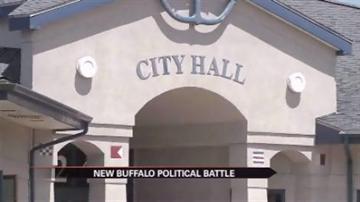 BERRIEN COUNTY, Mich. -- Residents of New Buffalo ousted the mayor and voted in a new city council member in the last election. The current council is scheduled to replace an outgoing member on Saturday and the council member –elect and residents don’t want that to happen.

"New Buffalo is all about summertime. There are lines out the door, thousands of people at the beach. This is the place to be,” said Dean Carlson, co-owner of Nancy’s at the Lake.

Carlson admits it's tough to keep the business open year round.

"The margins are thin and it's tough for us,” said Carlson.

He feels the city's leadership has a lot to do with it, so he voted with the majority to oust Warren Peterson, the current city mayor and elect Pete Weber.

"I won the battle against the sitting mayor of this city of New Buffalo- I won by a decent margin and the people spoke because they want change,” said Weber, New Buffalo City Council member.

Weber won't assume his position until next Tuesday's council meeting.

But this Saturday the current council will appoint another person to the 5 member board to fill a seat for former council member Susan Maroko who recently resigned.

That news of the Saturday meeting isn’t sitting well with some business owners, residents and Weber.

"Saturdays are when we need to be here working and supervising employees,” said Carlson.

"I think that it is absurd that a person who is voted out should be able to pick the people coming in,” said Weber.

"I actually sent a letter to the city manager requesting they cancel this meeting on Saturday,” said Messinger.

Rusty Geisler, the city manager, didn’t want to go on camera but said Saturday's special council meeting was scheduled long before the public election between the current mayor and Pete Weber.

The mayor of New Buffalo and the mayor pro-tem are not full-time positions.

We tried to contact Mayor Peterson and Mayor Pro Tem Migs Murray however they did not return our phone calls.