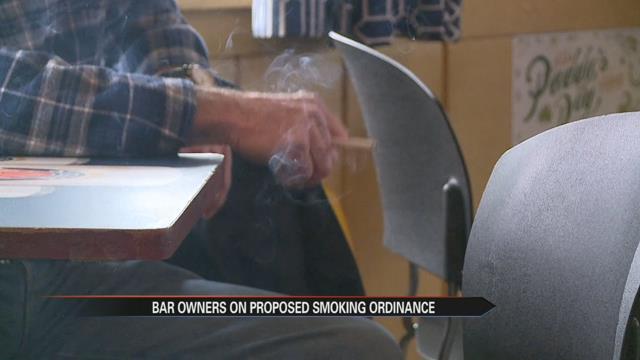 Bar owners are teaming up to try and stop it from moving forward in council chambers.

Ken Stephenson has been a loyal customer at Mulligan’s Gar and Grill in South Bend for five years.

While Stephenson doesn’t smoke, he is against the proposed smoking ban that will make its way in front of the Common Council for the first time Monday night.

The proposal is backed by the Smoke Free St. Joe Coalition.

In 2012, the Indiana Legislature passed a statewide smoke free law that prohibited smoking in most workplaces, but exempted some bars, private clubs and casinos.

Patrick Mulligan has been the owner of Mulligan’s Bar and Grill.

“Our employees are very happy to work here and they make a decent living here. Potentially my wife and I could lose our living and they could lose theirs. I don’t know if I would be willing or feel proud of glad to have that happen,” says Mulligan.

During an impromptu press conference held at Mulligan’s on Monday, Frank Julian, who’s representing the group of 60 to 70 bar and restaurant owners in South Bend, said the council needs to change the date of the vote that is now slated to take place on March 28th, which happens to be Dyngus Day.

“A day when a lot of the bar owners and frankly a lot of the citizens of south bend will be unavailable to participate in the democratic process because they are going to be enjoying in what’s a south bend tradition, Dyngus day,” says Julian.

Not only would they like the date changed, but they are asking the council to take a step back and research the economic impact this decision could have on business owners.

“I do think that it needs to pushed out so we have time to put a committee together and do a actual study on how it’s going to impact the economy here in south bend,” says Jesse Davis, who’s against the smoking proposal.

At the common council meeting Monday night, the council approved a motion to move the decision on the smoking ban to a date after Dyngus Day.