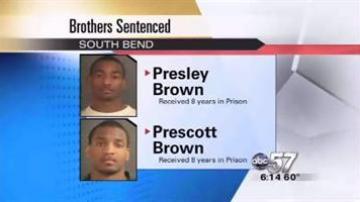 SOUTH BEND, Ind. -- There was an emotional scene inside of the St. Joseph County courthouse, where two brothers learned their fate on Thursday.

A judge sentenced both Presley and Prescott Brown. The brothers are charged with attempting to rob Lt. John Collins at his home last November.

Presley Brown received a six-year sentence for criminal recklessness and pointing a gun.

The brothers apologized and the 28-year police veteran said he forgave the men, but cannot forget their actions.

A third suspect is scheduled for a trial date later this month.