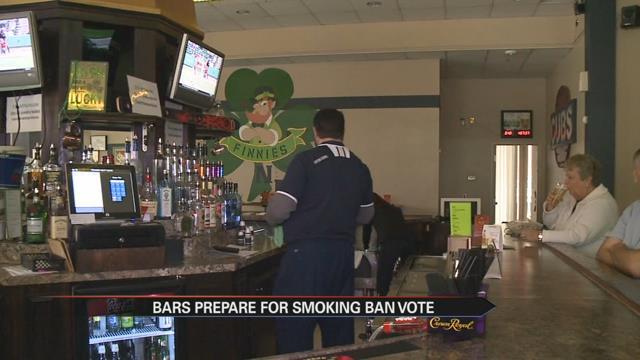 Monday was Dyngus Day but Tuesday will be decision day for the future of bars in South Bend.

Several local businesses are preparing to take the fight to city before the common council votes on a controversial smoking ban bill.

This will be the third time the bill has been brought up in the council.

The two other instances were shot down after an overwhelmingly negative response from the community.

And now a few business owners are hoping the third time’s a charm and they can finally put an end to this smoking ban.

“[Councilman Gavin Ferlic] is one that has refused to contact me or come out, visit our location, anything,” said Rick Ruszkowski, the CEO of Finnies Next Door.

Ferlic is one of a few local leaders that were not welcome in Finnies on Dyngus Day.

“I feel his future success in politics depend him on passing this law and this is at all costs,” said Ruszkowski.

Several council members are looking to keep smokers outside of South Bend businesses.

But quite a few businesses say the choice belongs to customers.

“You must be 18 to enter and it’s a smoking establishment. If you don’t like smoke, don’t come in here,” said Dan Curl, member of American Legion Post 303.

Many in American Legion Post 303 felt taking away customers’ choice will drive them to competing clubs on the county line.

“We have another legion right down the road a mile away that they will be able to smoke in,” said Gary Lyvers, finance officer of American Legion Post 303. “You can go right across the street then and smoke and drink in one where the other it would be illegal to smoke in.”

Councilman Ferlic however says he doesn’t expect this bill to hurt business in the city.

He says he’s just looking out for the well-being of all citizens.

But bar owners say their input should be considered before the council does what they think is right.