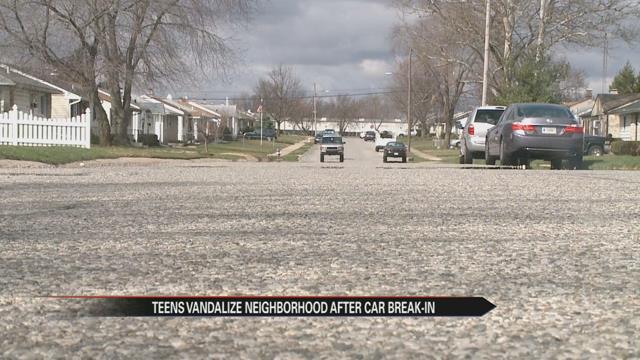 Residents on Iowa Street in South Bend are upset and concerned after a car burglary led to multiple homes and cars being vandalized by a group of teenagers.

“None of this would’ve happened if they had been detained and [taken] to the Juvenile Justice Center for the first time,” Brenda Hawkins said.

The first time was after five teenagers, between the ages of 13 and 16, broke into a work truck that belongs to Hawkins’ husband.

South Bend Police said the kids stole a package of light bulbs and some electrical outlets from the truck Thursday night around 9 p.m., but a neighbor witnessed it all and called police, who responded and apprehended the kids.

“We got the stolen property back from the police, but then they said they couldn’t take them to jail because they were minors, and the Juvenile Justice Center wouldn’t take them, so they had to release them,” Hawkins said.

Officers drove the one suspect who was caught with the goods home to his family, but the other four were simply told to scram.

Less than 90 minutes later, Hawkins said the kids returned to Iowa St. with another friend.

“They were standing down at the end of the road, and as soon as the officers left, they just started coming down the road and they were kicking cars and hitting cars and throwing rocks at cars and at everybody’s house,’ Hawkins said.

The teens broke at least three car windshields and damaged the exteriors of some homes.

“I was terrified,” Sylvia Wagner said. “I was in bed and I didn’t know what in the world was hitting my house. I didn’t know if somebody was breaking in, if somebody shot through the window; I didn’t have the slightest idea.”

A piece of siding right underneath Wagner’s living room window was cracked and rocks hit her satellite dish.

“This would never have happened if they would’ve been arrested,” Wagner said.

South Bend Police said they are not allowed to take juveniles into custody unless instructed by the Juvenile Justice Center (JJC).

The JJC said in an email that a point system is used to determine if juveniles need to be incarcerated or if they can be released to their legal guardians while they wait for a hearing to be scheduled.

The point system, according to the email, includes such things as the seriousness of current allegations facing the juvenile and the safety of the community and juvenile.

But residents on Iowa St. thought releasing the teens to their guardians was not wise, because the teens allegedly warned residents that they would be back.