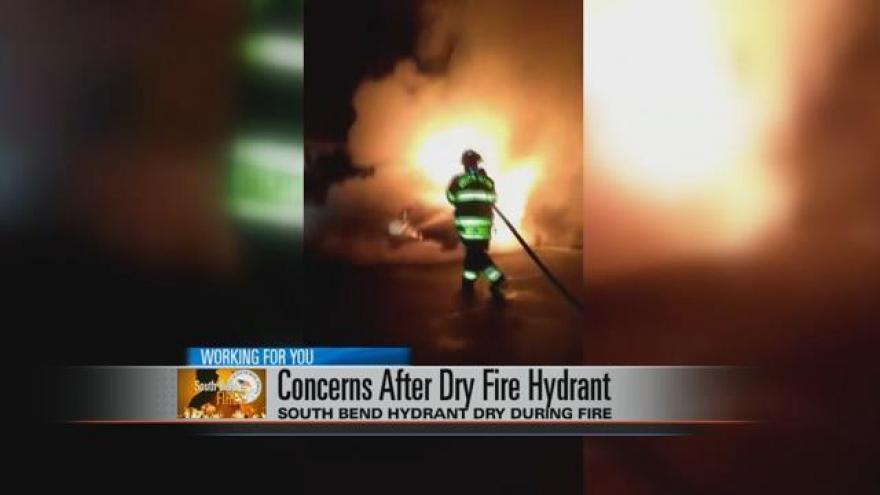 A car fire in a South Bend neighborhood sparked the question of safety.

It all started with a tip from a concerned South Bend man who saw that car fire on Sunday. He spoke exclusively with ABC57, saying he wanted to bring light to the issue of non-working fire hydrants in his neighborhood.

On Wednesday, ABC57 News confirmed crews do inspect hydrants for issues, but sometimes only learn there’s a major problem during an emergency.

“When we’re doing our initial inspection, if we come across it and we’re aware, we’ll do something about it,” said Bob Krol the Director of Distribution at the South Bend Water Department. “But most of the times it comes across during some kind of emergency situation.”

On Sunday around 2:30 a.m. Ladell Allen said his cousin’s car caught fire near Bissell and Arthur Street in South Bend and South Bend crews responded to this flaming car.

“The Fire Department came and they got it extinguished, but then they ran out of water in the process,” said Allen.

As the firefighters realized they needed more water, they quickly headed to the nearest fire hydrant on the corner, but no water was coming out.

Captain Gerard Ellis, with the South Bend Fire Department, says when things like this happen there’s always an alternative.

“Usually there’s another fire truck minutes behind them. Every fire truck in the city of South Bend, like this behind me carries about 750 gallons of water.”

But Allen says this brings a bigger problem to light: non-working fire hydrants.

“During the time they were trying to get more water that car caught on fire a second time. The main issue here is no telling how many others in our city are not working properly. We’re talking lives here, people’s lives,” said Allen.

According to Krol, there are 4, 500 municipal hydrants that the water department takes care of.  “In the winter time, the South Bend Water Department goes out and does field inspections,” he said.

Sometimes they find problems like tree roots getting in the way, but again there’s no way to know if they’re not functioning, unless they’re put to the test.

“When the fire department uses them in the winter, they notify us saying, “We’ve used the hydrant..” Our crews then go out inspect the hydrant again,” added Krol.