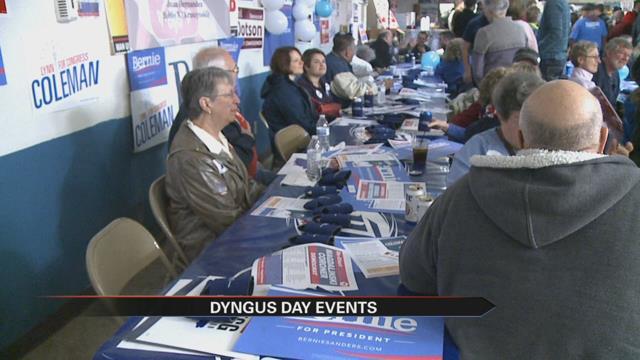 Both Democrats and Republicans celebrated the political holiday.

It’s a great celebration of politics and heritage and everything else,” John Zody, chairman of the Indiana Democratic Party.

When candidates and their supporters weren't eating Polish cuisine, they were campaigning.

Walorski faces competition for her House seat this year from Democrat Lynn Coleman.

“I’ve been to countless Dyngus Days before just as a citizen and a supporter for other candidates, but never before as a candidate myself,” Coleman said.

Republican Congressman Todd Young was campaigning to trade his House seat for a role as senator.

“I’m the conservative candidate that can make sure that Republicans hold on to this U.S. Senate seat,” Young said.

As Gov. Mike Pence runs for reelection, the Democrats have a gubernatorial candidate of their own in John Gregg.

One thing both parties agree on is the importance of Hoosiers casting those ballots on May 3.

“Registering to vote and voting is the number one most important thing you can do as a us citizen, because voting is going to affect literally everything that you do,” Sarah Knowlton, a South Bend democrat said.