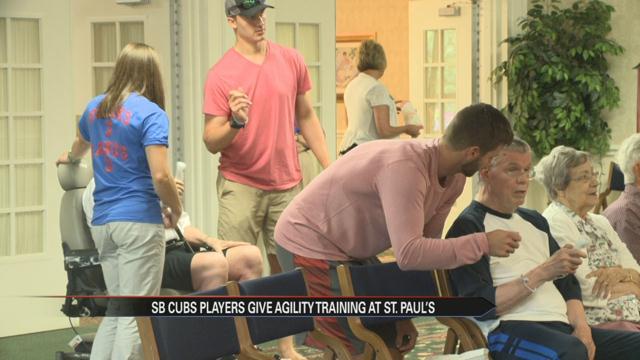 South Bend Cubs players who have been living at a local retirement community gave back to their neighbors Tuesday.

The athletes have been living at St. Paul’s Retirement Community as part of the team’s “Silver Sluggers” program.

They were also able to show off their best pitching techniques.

Their goal was so help the seniors learn about how important an active lifestyle can be.

“Wii baseball is definitely different. You have to time-up, that's kind of like what we do in baseball, you know, everything has to be on time. Just teaching them that is pretty cool,” said pitcher, Craig Brooks.

The two players have lived at Saint Paul’s for a couple of months as part of the partnership between the Saint Joseph Health System and The South Bend Cubs.

Seniors who come out to Wednesday night’s game at Four Wind’s Field will be able to get discounted tickets.