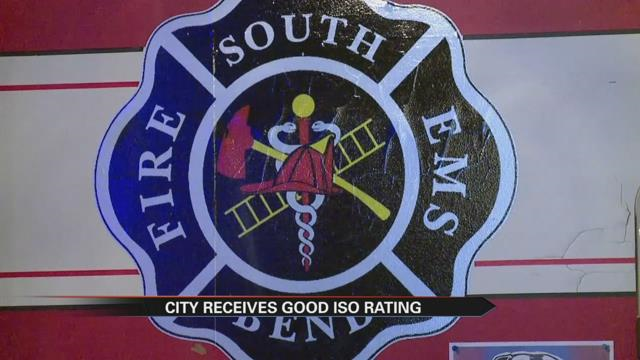 Firefighters and first responders work around the clock to keep their communities safe. The South Bend Fire Department has been recognized for their hard work in fighting fires and first response.

On Monday the city's ISO rating was raised from a three to a two by the Insurance Services Office. This agency comes in every four years and evaluates fire departments across the country.

“It’s a national benchmarking agency that allow us to be able to go in and see how we’re doing competitively with other fire departments in the country,” said South Bend Fire Department Fire Chief Steve Cox.

The company basically takes a tally of everything going on in the department. The rating increase is a result of a combined effort by South Bend Fire, South Bend Water Works, and the St. Joseph County Dispatch Center.

“They audit our department. All the services, equipment, training, personnel, the deployment of our resources, including station placement and everything,” Cox added.

South Bend's rating was increased based on the fire departments ability to respond to fires, their first-alarm response, and water supply system.

ISO rated thousands of fire departments and South Bend is one of only six Indiana cities to get a rating of a two. The scale is based on one to ten, with one being the best. Only a small number of cities in the U.S have a rating of a one.

“We’re proud of this because this reflects excellence. One of the biggest values that we look to live by in this administration is excellence and to me excellence means being one of the best in the country,” said South Bend Mayor Pete Buttigieg.

With the increase in ISO rating for the city, some residents may be eligible for insurance premium drops. People wanting to learn more will have to talk with their insurance provider to see if they are eligible.