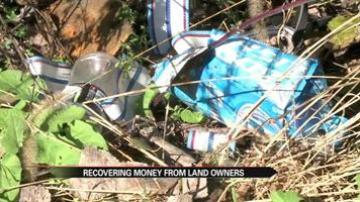 SOUTH BEND, Ind. -- The city of South Bend is making changes to how they handle recovering money from landowners who owe fines. The city hasn't always been good about going after people who don't pay, but now they're focused on getting what's owed.

Many have been cleaned up by South Bend's Code Enforcement clean up crews.

That comes at a price. If the city gets the call, the owner gets the bill.

The problem for the city is a lot of those bills go unpaid.

"Since I've been here I have filed 296 lawsuits since August 1 that total over $100,000," said Carrie Gaines, Deputy City Attorney of South Bend.

Gaines was hired this summer to go after people like Joseph Grabill.

Grabill owns a lot of properties and almost every one of them has been cleaned up by code enforcement.

His bill from the city of South Bend now totals more than $12,000 plus interest.

City employees aren't the only ones tending to Grabill's properties.

Clara Cotton and her husband Zach have lived across the street from one of his properties for 15 years.

"15 years is a long time to take care of somebody else's property," said Clara.

Shortly after they built their home, they decided to do something about Grabill's lot.

"We noticed that this property across the street from us was growing up and people were coming by dumping their garbage over there," said Clara.

So they cleaned it up and have been at it ever since.

The city is getting tough on people who don't pay.

"I'm a girl of my word, and I will sue you in 20 days if you don't contact or pay. However, I am also a very reasonable and kind person and if you come to court willing to pay your debt, I'm very reasonable with the terms," said Gaines.

For the last two days, we've been trying to get Grabill's side of the story.

We've stopped by his office and left messages on both his cell and home phones.

None of our calls were returned.