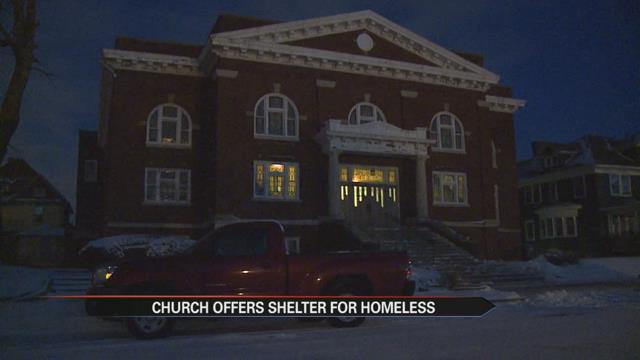 As Winter temperatures reach a low, the homeless in South Bend are in need for shelter more than ever.

A South Bend church has opened its doors to those who have been denied refuge at local shelters.

“Nobody deserves to die in the cold weather,” said Barbara Smith, stays at Doulos Chapel.

The Doulos Chapel has housed more 60 homeless people since they opened their doors two and a half years ago.

Patricia Wigfall has been staying at the church with her husband for about a year.

“We had nowhere to go. The center had no beds. Didn’t know what we were going to do, it was cold,” said Wigfall.

Cold and without a place to stay Wigfall turned to her church for guidance.

“We were members of the church and they said well you always have a place here and they told us to pick a room and make it our home,” said Wigfall.

Although the church only has heat in a few rooms, minimal electricity and is under renovation, Pastor Mario Sims says it’s better than the alternative.

“We became the shelter of last resort. This is housing out of necessity, this is housing that in some instances will save a life,” said Pastor Sims.

Some shelters only allow men, others won’t take you if you smell like alcohol, and in cold weather—many fill to capacity.

“What we’re offering is better than sleeping in a car or under a bridge or in a tent somewhere in sub zero temperatures,” said Pastor Sims.

Pastor Sims says by offering a place to sleep and a bit of guidance-- he sees troubled lives turned around.

“To show these people, this family of people that other people care. Giving them the type of motivation we believe they need to become functioning, law abiding adults.”

“And that’s what it took, them loving me for me to love myself and now I can love other people. I’m a totally different person from what I was before,” said Wigfall.

If you or someone you know needs a place to stay, Doulos Chapel is located at 608 S Saint Joseph St.