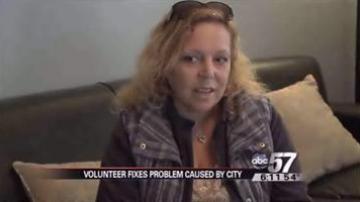 SOUTH BEND, Ind. -- A woman caught between a utility and the City of South Bend finally got some relief.

Veronnica Towne said a city truck pulled an electric wire and the electrical box out of her house on Marion Street.

AEP fixed what it could, but said it would not put the box back on her house.

She said the city refused to take responsibility.

She made 66 phone calls over three weeks before someone suggested that she call the electrical union -- who ended up doing the work for free.

"I can't explain how much I appreciate. It is a really community building more and I just think they did it because they realized it wasn't my fault," said Towne.

Towne also said that when dealing with the city, you have to be tenacious and not give up.