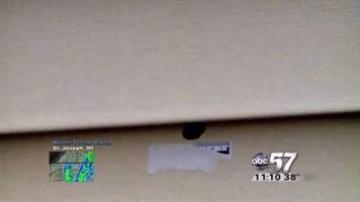 SOUTH BEND, IND. -- A South Bend mother was gripped by fear due to her neighborhood being shot up twice in a week.

Police said the man who lives in a home in the neighborhood, 28-year-old Alphonso Sutherland, reported his house had been shot up during the previous week, but neighbors said his house was shot up in less than a 24-hour time period.

Tuesday night Danielle Ayodo and her children woke up to gunshots two doors down from their home.

"Around 2:30 I heard eight gunshots," said Ayodo. "I don't know how many, but it sounded like eight. It woke us up, it startled us."

Ayodo said she was particularly scared Tuesday night, because she and her kids were camped out in their living room in the front of their house. She said this isn't the first time crime has happened at the 1600 block of North Adams Street.

"The week before we heard a girl, she took a bat and busted out a car window right outside of this home," said Ayodo.

Sutherland said he does not know why his house is being targeted.  South Bend police say dope dealers have lived in this neighborhood in the past and now sometimes payback comes back to the wrong tenants.

"We had problems when we first moved in here, people kept coming to our home looking for this guy and I was like, 'He is not here,' "said Ayodo.

She said she does not care whether the neighborhood is being targeted for old or new crimes, she just doesn't want any part of it.

"I'll probably move out of the neighborhood."

Ayodo said she plans on moving to a new neighborhood where her kids can play safely in her own front yard.