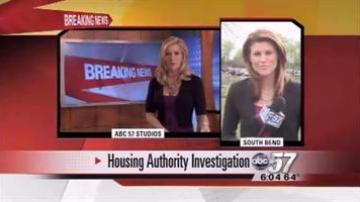 Accusations of corruption, misuse of power and sexual harassment at the housing authority first came to light four months ago.

In December, two employees accused Leonard-Dent of sexual harassment and after that several more victims came forward. Those who came forward with allegations against the housing authority called for her resignation, but the board never acted.

Now, those employees are finally getting what they wanted.

The housing authority's board of commissioners filed into the room with only one thing on the agenda during Friday's meeting -- to accept Marva Leonard-Dent's resignation.

"The board of commissioners believes that it is in the best interest of the housing authority to accept the executive director's resignation," said board member Earl Hairston.

After the meeting, Hairston made it it clear that Leonard-Dent was not asked to step down,"No the board did not ask for a resignation".

For months several employees have come forward with allegations of sexual harassment and corruption within the housing authority.

Many of those employees not only asked that Leonard-Dent step down, but that she be put on leave during the the board's investigation into the allegations.

The board's response to the demands was that its members did not want to rush to conclusions before looking into the matter first.

Yet the results of that investigation have never been discussed and now board members will not talk about the allegations at all.

Although Hairston would not comment on whether the allegations had anything to do with Leonard-Dent's resignation, he did briefly comment on what is next for the interim.

"We will come together to discuss that interim position as we begin our search for a permanent executive director," said Hairston.

Hairston said the board plans to hold another executive session sometime next week to, hopefully, pick an interim executive director. Hairston also said the board's goal is to find a permanent replacement for the position as soon as possible.