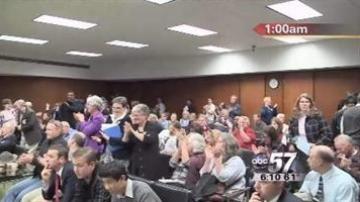 SOUTH BEND, Ind. -- A South Bend human rights ordinance is about to get an overhaul.

The ordinance protects against discrimination based on gender identity and sexual orientation.

Mayor Pete Buttigieg spoke first in favor of the bill.

Critics argue that the language is too vague, and gender identity is not easy to distinguish.

Supporters of the bill say it's a step in the right direction.

"This is a good victory for the people of South Bend.  It does what needed to be done five years ago.  It's the kind of action that people of South Bend can be proud of.  It'll make it a progressive first-class city," said Rick Sutton of Indiana Equality Action.

"If there is an attempt to enforce it then there is going to be an opportunity to overturn it and that is certainly the opportunity we will take," said Patrick Mangan of Citizens for Community Values.

The new ordinance goes into effect on April 6.