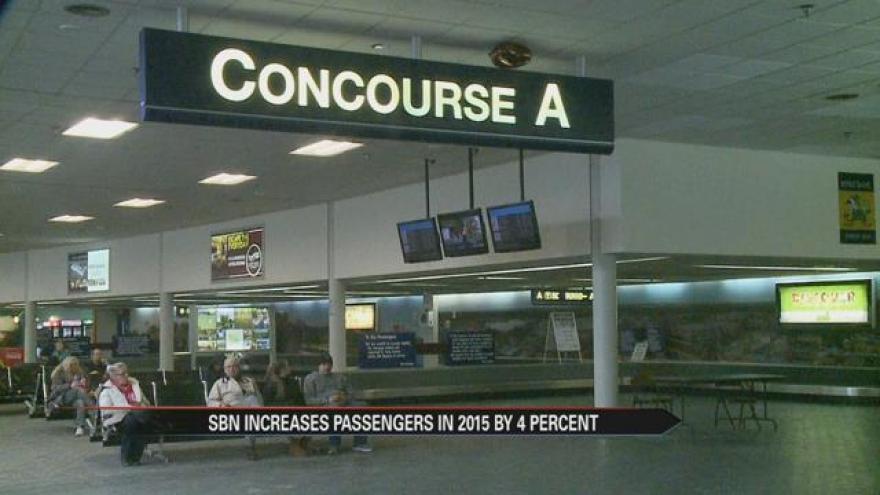 South Bend International Airport has received its 2015 “report card,” and the results are looking good.

“That was what basically brought me to South Bend, was the direct flight and the cheap flight from South Bend to Vegas and back from Vegas to South Bend,” Ohio resident Miguel Gomez said.

Gomez lives two hours from South Bend in Stryker, Ohio, but he chose to fly out of Michiana for a trip to Vegas.

“Same distance whether I want to go Detroit or here,” Gomez said. “And [South Bend] offered the better opportunity.”

His choice to fly out of South Bend instead of Detroit or Chicago is one more people seem to be making, because the airport’s numbers are going up.

All of this helped contribute to an overall growth of 4 percent; meaning more than 314,000 people flew out of South Bend last year.

“We’re thrilled!” South Bend International Airport Director of Marketing and Development Julie Curtis said. “You know, any time that we see increased numbers, that’s reason to celebrate and to be happy.”

Curtis said the airport’s growth tells airline companies that expanding is worth it.

“We always tell people, you know, they’ve got to use the service that we have, and that’ll help us to be able to attract that additional service, additional routes, new airlines,” Curtis said.

As for that 35 percent growth in charter jets flying out of Michiana, Curtis said it’s because of more reasons than you might think.

But passenger growth is not all the airport is seeing.

“Take that away,” Curtis said. “What does that do from an economic development standpoint? Businesses won’t look to locate here.”

She added, “They won’t look to expand here because they need to have that air service to get to and from their customers.”

Gomez summed it up:

“This place is laid back and I couldn’t expect anything better here,” he said.