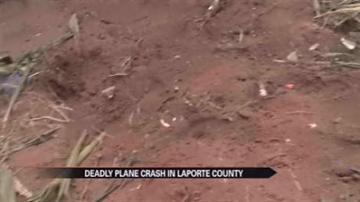 LAPORTE COUNTY, Ind. — A South Bend man has died after his ultra-light plane went down in LaPorte County Sunday morning. According to the LaPorte County sheriff's office, the man has been identified as 36-year-old Benjamin T. Hubbard of South Bend.

“I was out in the yard and it sounded like a crop duster out in the distance,” said neighbor Bruce Payne.

But it wasn’t a crop duster, it was actually an Ultra Light plane that was flying from Niles to Plymouth.

“I heard sirens so I figured the crop duster crashed,” said Payne.

The aircraft crashed in the cornfield and the pilot, 36-year-old Benjamin Hubbard, was killed on impact.

His friend who was flying another aircraft told police he was meeting Hubbard for breakfast in Plymouth.

Hubbard was late so his friend thought he went to refuel, but when he never showed, the friend immediately notified police.

It took police over four hours to find the plane. They say what made it so difficult were the tall cornstalks.

“This morning at like seven thirty, there was a Pleasant Township fire department guy who told me a crop duster had crashed,” said farmer Fisher.

Officials made a path through the cornfield and towed what was left of the plane to a nearby hangar so the F.A.A. can figure out what went wrong.

Bruce Payne says he never expected something like this to happen so close to home.

“You always think never in my backyard,” said Payne.