South Bend man on the run. 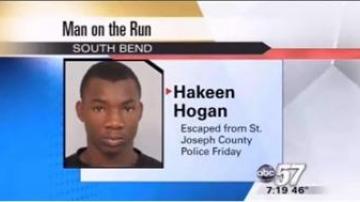 SOUTH BEND, Ind -- The search is on right now in South Bend for a 19-year-old who broke free from court Friday morning to avoid going to jail.

Officers tell ABC 57 News that Hakeen Hogan managed to escape the grasp of two St. Joseph County deputies. One of the deputies wrestled with Hogan in the stairway while the other tried to grab him as he ran out of the building.

Hogan was in court related to a misdemeanor marijuana possessions charge. He was told he would have to pay 750 dollars in bond or be taken into custody. That is when he took off.

Hogan was one of five men charged with the car-jacking of two Holy Cross College students in 2009. The co-defendants in the case refused to testify against him.

Hogan was arrested again in August on drug charges.