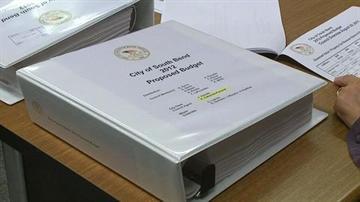 Mayor of South Bend, Steve Luecke, proposed a preliminary city budget Monday. The total budget is $263.4 million, which is two percent less than its 2011 predecessor.

Mayor Luecke says, the budget is designed to give the incoming council and mayor the flexibility they need to make adjustments they see fit, and does not introduce any new spending initiatives. “We’ve been able to maintain police and fire at full strength. Our parks department, we’ve been able to keep facilities open. And be able to manage the recreation programs that we’ve begun,” said Luecke.

Projections show revenue is expected to come in similar to how it has in 2011. Meanwhile, the current Common Council will vet the budget and the programs it funds for inefficiencies and misappropriations.

Tom LaFountain is the chairman of the council’s Personnel and Finance Committee. He is expecting this year’s budgeting process to be easier than previous years. “We are probably in a better position to make a budget this year than we have in any other year since I started on the council,” said LaFountain.

The city has had to make difficult decisions over the last few years when it comes to paying for city services. This year, no major cuts have been proposed and with the help of a tax increment financing district being dissolved, the city appears to be in a stable financial position.

But LaFontain says that can all change. “One thing [that] should have been learned over the last three years is, things can turn south real quick,” said LaFontain.

One issue that will have to be addressed at some point in the future is a drop in federal funding for some services.

The code enforcement department was receiving about $500,000 a year in federal dollars to demolish homes; Mayor Luecke is proposing the same amount come from the city, with funding waning. “It really should be more, right now, with the abandoned homes that we’ve seen, with the foreclosures and other issues that we’re facing,” said Luecke.

But Luecke says that is something the next mayor will have to decide for himself; LaFountain says the proposed budget will be enough to get the next mayor through his first year in office.

For the next two weeks, council members will hear from every city department and go over every line item in the budget. The final budget is expected to be passed in October.