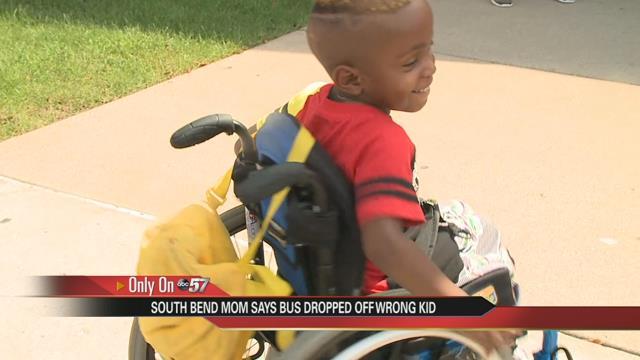 A South Bend mom is looking for answers after another child got off the bus in front of her house instead of her special needs son.

Banks says her son, Alvin, usually gets dropped off in front of their apartment complex on Generations Drive around noon every day.

Alvin is only 3-years-old and uses a wheelchair to get around because of Spina bifida.

He needs a ramp accessible bus to take him to and from class.

On Tuesday, a serious mix up could have had big repercussions.

Banks says she called the school to confirm her son was on the bus that was dropping students off across the street.

She says the school confirmed he was, but when the wrong student emerged from the bus she was shocked.

“They pulled up and opened the door and brought some Chinese little kid off the bus. Where’s my son? They asked me, ‘Are you sure you’re not a foster mom?’ I said I would know if I’m a foster mom,” said Banks.

It turns out her son was left at the school after the first bus was not wheelchair accessible.

“I was real nervous. Studebaker didn’t call me until 1:30 maybe,” said Banks.

“When bus arrived to pick up the students who attend school in the morning, the bus did not have a wheelchair lift. The bus departed with all but one student who is wheelchair-bound. Our transportation department was notified to send another bus to the school with a lift to transport the child home. The student waited at the school for the second bus to arrive. The driver of the first bus stopped at the house where the wheelchair-bound student lives, because it was on the driver's "Route sheet." the wheelchair-bound student was taken home by a school bus with a lift, but the drop off time was later than normal.”

But even with a response, Banks says there are questions yet to be answered.

“I was told if I’m late picking my son up they would call DCS. They were two hours late dropping my son off. What I think is, he was on the bus the other child was supposed to be on and there was a mix up!”

The other child is safe, and Banks is thankful Alvin is also safe.

Banks says Alvin is scheduled to have another surgery on Wednesday and despite the mix up, he is in good spirits.