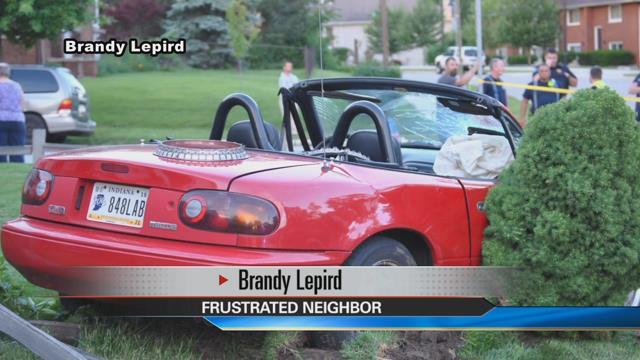 A South Bend mother is petitioning for change in her neighborhood. She wants the city to add stop signs or speed bumps to her Northside Boulevard block, after a speeding driver crashed into her front yard Tuesday night.

“I am constantly yelling at people out here to slow down,” Brandy Lepird explained.

Neighbors estimate the driver of the red Mazda was going well above the 30 mile per hour speed limit, before he hit a utility pole and crashed into Lepird's front yard.

Jared was playing outside with his dogs when he saw the car careening his way.

“If that pole wasn't there he probably would have gotten killed,” said Lepird.

She said speeding along Northside Boulevard has been a problem the entire seven years she's lived there.

“A house has been hit twice up the road here due to speeder,” Lepird said. “There's kids that travel here for school. There's plenty of pedestrian traffic due to the new river walk. And there's not a single stop sign down here. For everybody's safety I think there needs to be quite a few stop signs."

Lepird is getting together a petition to take to her River Park Neighborhood Association in hopes the city of South Bend will create a plan to reduce the speed.

She is asking for additional stop signs or speed bumps.

“I rather see my kids playing outside than fear them playing outside because they're afraid a car is going to come flying down the road and into our yard, hitting them,” Lepird explained.

The city of South Bend said neighbors interested in more stop signs can visit the County City Building and go to the Department of Engineering to fill out a form.

The city will then do its own analysis.
Share this article: