South Bend 'occupiers' may get the boot 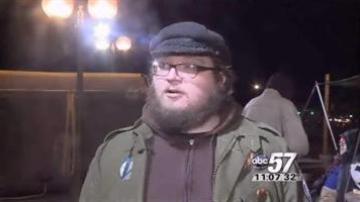 SOUTH BEND, Ind. -- Across the country, 'Occupy' protesters are getting kicked out, and now 'Occupy South Bend' might be getting the boot as well.

South Bend's Common Council is demanding that the city's administration announce their position about 'Occupy South Bend' protesters and what to do about them!

ABC 57 took to the streets where the protesters have been camped out for weeks to see what is happening locally with these issues.

The Common Council claims that the 'occupiers' have been causing problems, using the restrooms of local business owners and asking for free food, but the protesters ABC 57 spoke with said that none of this is true.

David Guthry has been protesting big businesses and banks in front of the Morris Performing Arts Center for weeks.

He says the owners of local businesses have been more than happy to support the movement.

He says there is even one local business, which he would not name, that volunteered their restrooms to the 'occupiers' so long they used the facilities quietly and did not disturb customers.

"It's not at all uncommon for staff getting off work from a pizza place or just people driving by with kids in tow, to come by with large quantities of food, announce that it's here, and allow us to dig in," said Guthry.

Agave owner Julio Delacruz said he has had a couple of 'occupiers' come in, but they were invited. Julio said that as a small business owner, he can sympathize with the Occupy movement.

"The gal who was hosting the Rock the Vote event invited this guy in to come in and have some food and hang out for a minute. It was not an uninvited attendance," said Delacruz.

He says that the 'occupiers' have a right to picket, but if they ever become a nuisance, he has the right to refuse them service.

"We really haven't experienced it. I can't tell you that it's annoying, since it hasn't really happened. But if it did, I definitely wouldn't put up with it," said Delacruz.

The Common Council also claims that they are worried about issues with health and sanitation.

The protesters ABC 57 spoke to said that their campsite is clean, but they are happy to adhere to any regulations that the Common Council sets forth.