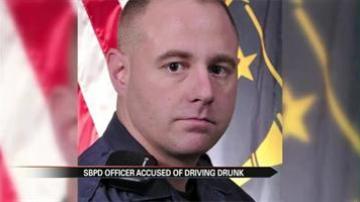 SOUTH BEND, Ind. -- For the third time a South Bend Police officer was arrested for DUI. LaPorte Police say they found Officer Jeff McKee at the scene of a crash over the weekend.

McKee is still an officer with the SBPD but he has not worked in nearly 8 months, since his last arrest.

Jeff McKee began his career with the South Bend Police Department in 2007.

"Once you make it through the hiring process; which you can ask anyone from someone who's been around as long as I have back to the newest hire, it's a long arduous process. It takes a while, and we feel that we do a pretty decent job vetting the people and getting the best potential hire," said Captain Phil Trent of the South Bend Police Department.

At first McKee embodied that, until May of 2012, when he drove the wrong way on a one way street without lights or sirens when responding to a medical emergency.

The resulting accident caused $14,000 in damage to his patrol car and sent him to the hospital.

From there everything seemed to start to unravel.

He went through a divorce and in October 2012 he was arrested for his first DUI in LaPorte where he lived.

Records show he registered a .13 BAC. He pleaded the charges to a reckless driving misdemeanor.

He was suspended without pay for 21 days.

Less than a week after receiving that suspension, he was pulled over again.

That time he registered a .24, three times the legal limit.

His suspension without pay was extended until that case was resolved.

That case is still ongoing.

This weekend, he allegedly ran a pickup over two telecommunications boxes on the side of the road.

This time two breathalyzer tests were conducted an hour apart. The first registered .19 the second .15

With a third arrest, what is McKee's future with the SBPD?

"The chief will make a recommendation eventually and the board will either accept it, modify it, or reject it," said Trent.

No matter what the chief's recommendation is, the department hopes McKee can turn his life around.

"Getting treatment, and getting help, and working through the situation to a good resolution personally," said Trent.

According to a LaPorte County police spokesman, they have a zero tolerance policy for drunk drivers

They say these arrests are evidence that they don't care who you are or who you work for, if you are driving impaired, you will go to jail.