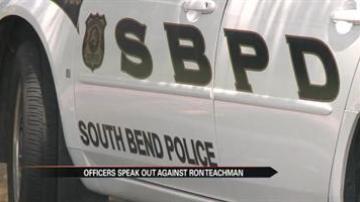 “If you choose to put a ceiling on how far we can go that is something we will retaliate against and we will speak out on that,” said South Bend Police Sergeant Nathan Cannon.

They first brought their issue to the South Bend Common Council three weeks ago.

And Saturday, in a closed door meeting with the city’s human resources department, the group voiced their complaints about Police Chief Teachman.

“Some of our primary concerns is the lack of diversity on the police department, and what we have noticed, and what we are now claiming to be blatant racism by Chief Teachman and his administration,” Cannon said.

They are accusing the police chief of unfair hiring practices. They say he creates positions without announcing them or putting them out for competitive bid so all officers have a fair chance.

The officers say it isn’t fair for current minority police officers and it also doesn’t encourage minorities to join the department.

“We’re police officers just like our white counterparts and we put our lives on the line just like they do, and we don’t hesitate. And our professionalism is just as great as anyone else’s out here. And the fact that we’ve been, I would say more than just slighted in promotions and recognitions and everything that goes on in the police department, it’s damaging, very damaging,” said Cannon.

They say they appreciate the fact that city is now taking this seriously, but they say they expect it won’t be an easy fix.

“We do have confidence in it and said that she is going to look into it and get to the bottom of the matter. As for what the results are going to be, we can’t say whether we’ll be happy with it or not,” Cannon said.

ABC57 reached out to Police Chief Teachman to get his response to these complaints and have not heard back.