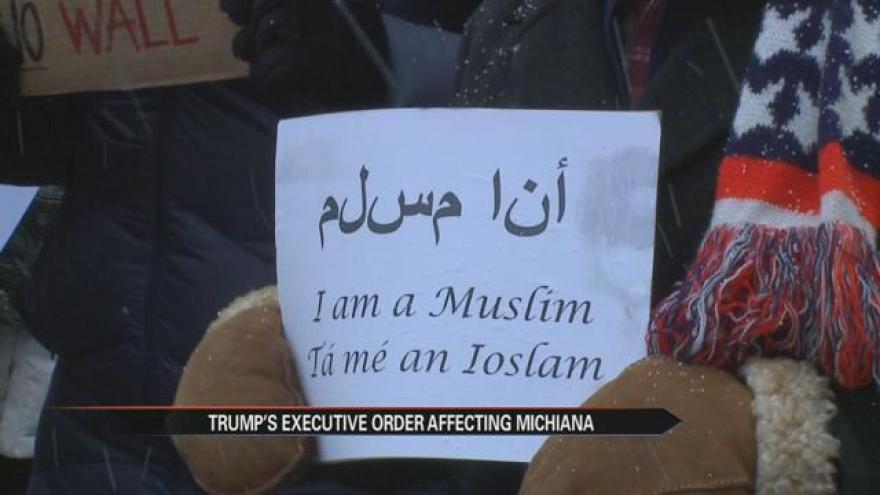 You’ve seen it in Chicago, Seattle, Dallas, practically all over the country. Now it’s come closer to home. People all over the world are protesting against President Donald Trump’s executive order of banning seven Muslim countries from entering the United States.

The Islamic Society of Michiana came together in solidarity chanting and marching for what they believe in.

Protesters made it very clear that their message is no ban, no wall. Over 400 people came to stand in front of the Morris Performing Arts Center to show what the city of South Bend believes in.

On Friday, President Donald Trump banned, for at least the next 90 days, citizens from seven Muslim- majority countries from entering the United States. According to CNN that’s roughly 218 million people.

A South Bend family from Syria, who have been in the U.S. for 19 years share their opinion on this ban. Ismail,  a member of the Islamic Society of Michiana says the executive order  is not right.

“These folks have been suffering for several years, going through crisis in their home countries.  As an American I want to stand up if there’s something not right and this was not right,” he said.

Ismail says he’s been receiving a lot of local support leading up to this protest, which is something he can always count on.  “If we don’t stand up all together this is going to keep moving on. What the president has signed does not represent us, this is not who we are. This is not our values.”

Ismail’s wife Reem, admits this is not the America she wanted to come to. “After we get used to here now we are so disappointed of the new discrimination on us. Not everybody is like this, carrying this Muslim behavior and carrying this attitude.”

Now both parents are left dealing with the aftermath of this order and find it hard to explain this to their children.

“Now we tell them don’t talk. I’m feeling scared because I don’t want anybody to attack us just because we are Muslim,” said Reem.

The order also makes it clear those seven countries are just a starting point. It’s unclear how many more countries will be added to the list.