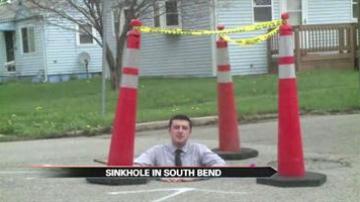 SOUTH BEND, Ind. -- A South Bend street has what appears to be a sinkhole and it's only getting larger. Residents who live near the intersection of Kenmore and Dunham Street worry about passing cars or kids falling into it. The hole is several feet deep.

"And it's gotten bigger in two days," said Diaz.

Worried, she called the city for help. They came out and put up three cones around it.

But given the size of the hole, she worries it may not be enough to protect neighborhood children and cars from falling in.

"It has to stop at the stop sign and that's right where the hole is. My mom says she was looking out her window yesterday and saw a bus," said Diaz.

The hole is several feet deep.

"A pothole is different. That's a sinkhole. When a kid falls into it or something, then they'll do something about it. It's a little too late by then," said Diaz.

The city of South Bend says they're aware of the issue.

After our calls, they sent a worker to come check it out again.

A little bit later, a utility worker came out to paint gas lines, leaving neighbors like Diaz skeptical, but hopeful a solution will come soon.

The city says the hole should be repaired by Wednesday morning.