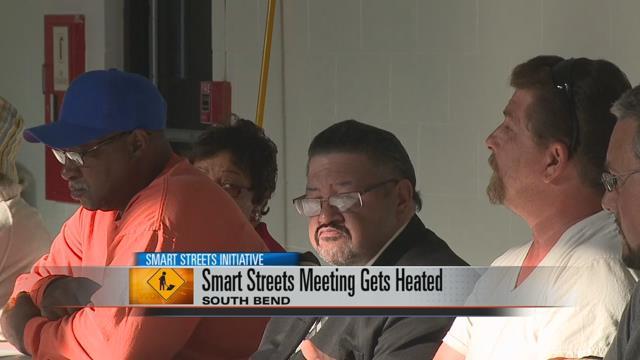 Residents on the west side of South Bend met on Thursday night to discuss concerns about the Smart Streets Initiative, which aims to make the streets easier to navigate for everyone on the road.

The city says it’s not up for debate anymore, and a lot of the issues are simply based on bad information.

Residents say this is an expensive project.

“My taxes are going up. I’m helping them pay for this thing but I don’t even want it in here,” said South Bend resident Tony Trinket.

But Ford says the concerns mostly come from residents being misinformed.

Ford says higher taxes are not a realistic concern, which is something they discussed with the public through community meetings in 2013.

“Over 30 public meetings, the message has come out loud and clear that there’s a very strong interest by the community for the city to make the investments in the infrastructure,” said Ford.

But it’s not just money that residents have an issue with.

“Every day when I leave, I almost have an accident trying to get on Lincoln Way or off Lincoln Way. I hope that Western Avenue really stands up and doesn’t let them put the same things that they did on our side of town because it’s not working,” said Viola Sims, President of the Kennedy Park Neighborhood Association.

The city also did research on safety and found that having three lane roads is safer than having four.

More information about the Smart Streets Initiative can be found here.