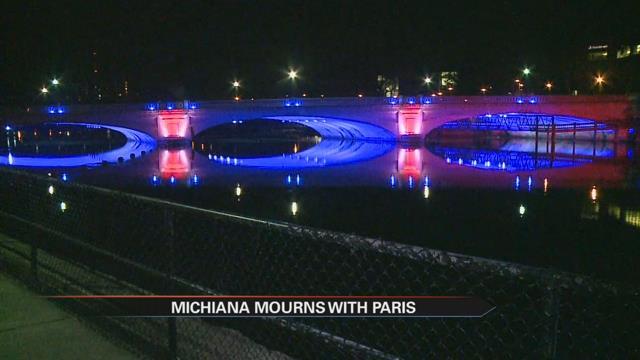 The terror attacks in Paris have prompted an international response in the form of tributes, prayer services and other showings of love and support – including here in Michiana.

“I think it’s a great idea,” Chicago resident Ken Marks, who was spending his Saturday in South Bend, said. “I think it shows solidarity with the rest of the world because there’s so many people hurting and suffering right now those who are far away, geographically, but close in spirit.”

The South Bend River Lights are paying homage to those who were killed and injured in Friday’s terror attacks in Paris.

“Everyone has seen some of the events of the world in recent years. From 9/11 to more recent events like the downed Russian airliner, and I think everyone realizes that it could be them,” said Marks.

Marks and Malia Oliver came from Chicago to spend their Saturday in South Bend and when they stumbled upon the river lights, they were taken aback.

Downtown South Bend is responsible for the lights and Aaron Perri, executive director, said in a phone conversation the lights are nothing more than his organization’s chance to silently honor the victims in France.

Perri said he wants the images of the lights to do the talking, not himself.

For Marks, the lights did just that.

“It shows that there’s hope for the world,” Marks said. “Instead of just ignoring our fellow human beings because it wasn’t us and going on about our way, it really shows that we’re still human and we care about each.”