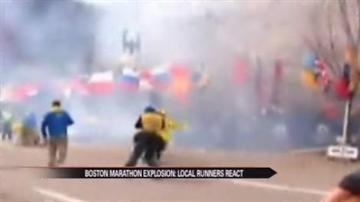 SOUTH BEND, Ind. -- Three people were killed and over 100 injured at the Boston Marathon on Monday. Lisa Smith of South Bend finished just one minute before the first bomb went off.

“I was a little concerned because I hadn’t heard from the one girl,” said D.J. Hanback.

Marathon coach D.J.  Hanback says he was worried when bombs exploded at the Boston Marathon.

“I got an automatic text when they both finished so I knew that they had finished,” said Hanback.

One of his runners, Lisa Smith, almost was among the casualties. She finished the race just one minute before the first bomb went off

Hanback says his runners were so shaken up by the explosion they are both hopping on planes back to South Bend.

Hanback says as a marathon runner himself he can’t imagine having such a shock during a race.

“The furthest thing from your mind is that you are going to have to worry about something happening at the finish line. You wait for that finish line at the Boston Marathon,” said Hanback.

He's happy his two runners made it across the finish line unharmed.

“One or two minutes slower, they would have been in that wreckage,” said Hanback.