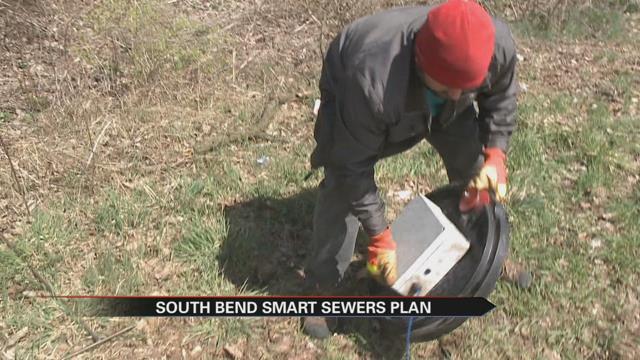 The city is finding cost-saving solutions in its sewers.

South Bend is using innovation to curb mandatory infrastructure upgrades that could cost taxpayers hundreds of millions of dollars.

Synergy in South Bend flows just as much as the city’s intricate sewer system.

“It was a spin-off company from Notre Dame researchers,” Said Kieran Fahey, director of South Bend’s long-term control plan. “It’s a success story for innovation at the university and making a real world application for technology.”

The city’s sewer system that’s over a century old is now outfitted with technology of the future.

“About 150 of these sensors are deployed throughout the city making south bend the most densely monitored sewer system we know of,” said Luis Montestruque, President of EmNet, LLC.

Before, a patrolling crew would have to dive into manholes to check blockage throughout the city.

Today’s smart sewers can now communicate with engineers behind a monitor.

This technology was developed as one answer to a looming nationwide EPA mandate  that could flush hundreds of millions of dollars out of local taxpayers’ pockets.

“There are over 700 communities in the states that has a similar problem to what south bend has,” said Fahey.

And those communities now have all eyes on South Bend, as the city’s continues to teach its old sewers new tricks.

“Communities across the country and internationally are recognizing south bend as the epicenter of smart sewer technology,” said Montestruque.

The current agreement with the EPA would call for new infrastructure that would cost more than $700 million.

These sewer sensors saved taxpayers more than $100 million, so the city is looking at more cost-cutting opportunities in innovation.