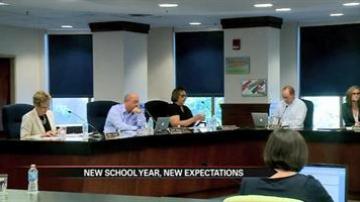 But the fresh slate comes off the heels of a rough 2013-2014 school year.  Schools battled bullying, and controversy over how some of those bullying cases were reported.

But perhap the biggest worry for parents is the standardized test scores.  South Bend School Corporation has the lowest average ISTEP scores in Michiana.  Dr. Schmidt says this new school year is a chance for a fresh start.

"We're excited to have our kids come back," says Schmidt.

Despite the issues with testing and violence, administrators believe there is a lot to be excited about.  South Bend's Redevelopment Commisssion is considering using half a million dollars to support STEM programming in the district.  That's science, technology, engineering and math that could be geared towards kids as young as kindergarten.

And South Bend New Tech High School is setting a standard for other schools in the district.

"We do something really well, and we're on the leading edge and we're innovators in the school system in the way we deliver instruction, and the work we put in front of students, and the way we engage and develop them," says John Kennedy, the principal at South Bend New Tech High School.