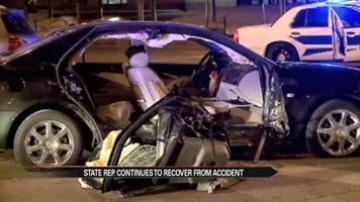 SOUTH BEND, Ind. -- State Representative David Niezgodski and his daughter Rachael have had quite the week. The politician from South Bend and his daughter were both injured in a car accident last Thursday evening.

Both have been released from the hospital and are recovering.

It happened right in front of the state capitol building in Indianapolis.

Niezgodski says he was driving through a green light, when another vehicle came out of nowhere, and t-boned them.

"Your mind kind of goes through a slow change as you’re reacting and you know something really bad is happening but you were just having a conversation so you feel like you just can’t comprehend it," says Niezgodski.

Both were initially reported as being in critical condition, but they were quickly upgraded.

Niezgodski says they're both grateful things didn't turn out worse.