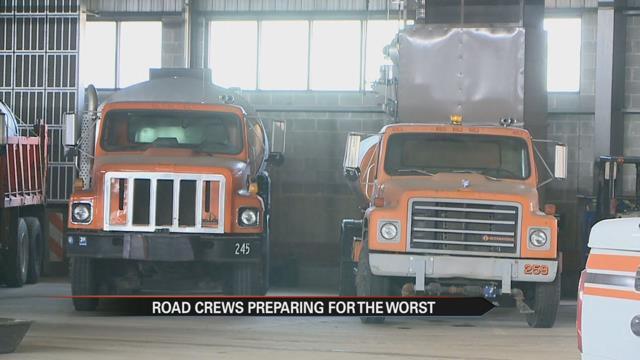 While the day crew patched potholes Tuesday, the night crew will prepare the plow trucks for snow.

“When the weather comes the guys all pretty much know that it’s overtime and our primary goal here is to get the streets clean and make them safe,” Supervisor Tom Whitaker said.

That starts in the garage, with a special radar system that tracks storms.

“We do prepare for the worst. Obviously it’d be a lot less overtime if it doesn’t hit and a lot less material used and fuel cost down,” Whitaker said.

While they’re always looking at costs, this year has been good to the Bureau of Streets’ budget so far.

“The weather’s been so mild, like i said prior to this last snow event we were about half the overtime,” Whitaker said.

As they had in prior winters, the department will have a full crew of 25 workers on at night.

“We run a full crew at night all winter long,” Whitaker said.

While they have plenty of it, the crew won’t be putting any salt down before the storm.

They say it would likely wash away in the rain.